On a freezing January day the greengrocer delivers a large box of Spanish Seville oranges for my O level Marmalade lesson.

We’ve stripped labels from empty jam jars and made a collection of the black haired gollies from pots of Robertson’s Golden Shred. Wonder if anyone will raise objections to these in future?

This is the first outing for the giant aluminium preserving pans stacked on the top shelf of the larder and I’ve dusted them and removed dead spiders and flies.

‘We’ll work in groups and share out the marmalade when it is made.’ 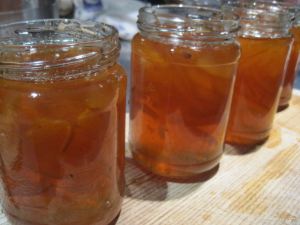 Carol has been ‘placed’ in my O level group with Vicky as no other teacher wants them. Cooking lessons are easy so why should I make a fuss?

The class despairs at their constant outbursts. They’d  love the pair to toddle off to smoke and drink Maxwell House coffee in the station cafe.

‘OK Carol – you and Vicky make marmalade on your own. Now all of you, slice the orange peel really thinly like this.’

I demonstrate how to cut tiny slivers of peel,  leaving the bitter pith behind.

‘Put the pith, pips and orange fruit in these pieces of muslin, tie up with string and simmer with the orange juice and water.’

A bolt of muslin is stacked on the top larder shelf ready for wrapping Christmas puddings and straining curds from whey to make cheese. And today my London teenagers will be tying it in tiny bags to boil in a pan. Oh ancient tasks of yester year.

Carol is on the moan again.

‘I don’t want no pips or peel in mine. We don’t eat them things.’

‘Carol, the pips and pith contain pectin which helps the marmalade to set, otherwise it’s runny and the peel is lovely on buttered toast.’

She doesn’t care. She and Vicky will strut out of the room soon, off to meet the local smokers who lurk outside the school gates.

We settle into the gentle rhythm of slicing the peel which  bursts with zesty fragrance. A warm, pungent calm descends.

This lesson is going well until Janice yells, runs to the rubbish bin and spits out a large lump of orange flesh.

‘Urrggh Miss, this orange is vile. Sour as anything. It’s off. Take ‘em back to the shop.’

‘Class, put down your knives and let me explain.’

The quiet hush has been disrupted again.

‘Seville oranges are bitter and sour. You don’t eat them. You cook them with sugar. The first marmalade was made in a factory in Dundee – they got a delivery of sour oranges that they couldn’t use so they invented a new recipe – Dundee Marmalade. Now let’s get on.’

I’m like the smart arse from Listen with Mother, only with a Midland accent.

Steam blurrs the classroom windows as we simmer the orangey juice then tip in vast quantities of Tate and Lyle sugar. Ah Bisto! The room smells delicious.

I rotate from pan to pan sticking the jam thermometer into the bubbling mixtures. Sylvia, my classroom assistant,  a 1970’s domestic goddess, follows with a cold plate for the wrinkle test.

‘If a spoon of your marmalade wrinkles on this plate, it’s setting!’ They look at me bewildered. Wrinkle? That’s for grannie’s stockings!

We’re ready. Hot jam jars come out of the oven and are filled with scalding, golden liquid. Quick now. Cover and seal it from germs with a circle of greaseproof paper and a crackly cellophane top tied with string.

The room glows orange –  floaty slivers of finely cut peel dancing in the gold jelly of our east London marmalade.

Two pots are different. Carol and Vicky have abandoned their sugary, orangey liquid which will probably never set and never deserve the name marmalade. But they gone down the cafe.

Comments Off on Making marmalade 1973